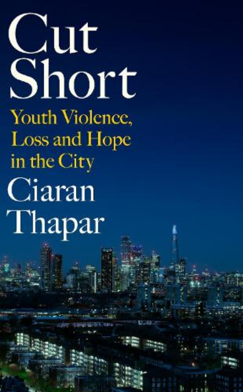 Ciaran Thapar is a youth worker and writer. Found in both GQ Magazine and South London community youth centres, Thapar brings his front-line insights to mass audiences. Earlier this year, he published his first book, Cut Short, centred on his experiences working with young people in London, and on the stories of three young men in particular. PHYVR project Principal Investigator Alistair Fraser reviewed Cut Short for the Times Literary Supplement, opening his review as follows:

"Ciaran Thapar’s Cut Short: Youth violence, loss and hope in the city takes the reader back to a time, only a few years ago, when stories of tit-for-tat postcode rivalries, street fights and police raids dominated British news; when, as Lib Peck, the director of the Mayor of London’s Violence Reduction Unit recalls, there seemed to be “something in the air”. Thapar, a youth worker, takes us to the heart of London’s violent street culture by tracing his experiences in schools, streets, prisons and youth centres. Along the way we see him transform from awkward outsider to trusted insider."